Our visit to Japan last month was ... sort of accidental. We'd heard about the Seven Stars in Kyushu, the new-ish luxury train running two- and four-day journeys around the island of Kyushu, and had read that the train was in such demand that you would need to apply multiple times to book a trip on it. So when we applied for the first time in April 2015 we fully expected to be rejected several times before maybe getting on board in 2017 or beyond. Sure enough, we missed out in the first ballot, but then someone cancelled and we were offered their place. So 'maybe we'll go to Japan sometime in the distant future' turned into 'wow! we're off to Japan!' I had no idea what to expect. We don't speak Japanese (apart from a few hastily-acquired 'polite' words) and were unsure how we'd go at navigating, ordering food, buying goods, etc.

We were lucky to have friends to provide tips and (gentle) guidance
My workplace has a long-standing collaboration agreement with Nagoya University and each year we welcome several visitors from there to Canberra. When I mentioned to one of our past visitors that we would be visiting Japan, he invited us to stay at his house! So we did. Our friends very kindly provided tips and suggestions for sightseeing and getting around, and were even able to join us for a few Nagoya attractions and meals out.

(Not) lost in translation
We managed to get by with just a few words of Japanese, and picked up a few more in our travels. Andrew also turned out to have a knack for deciphering signs and symbols. In a spirit of 'better late than never', we're now planning to take a beginner's course in Japanese so we'll be less clueless next time ...

Japan has the best public transport system we've ever encountered
As non-residents of Japan we were able to purchase Japan Rail Passes. These were really handy and excellent value! We used them to catch at least seven Shinkansen ('bullet') trains, two Narita Express trains, and a bunch of local trains. Our Nagoya friends also lent us Manaca smart cards, which we topped up and could then use for local travel in both Nagoya and other cities. Oh, and the trains were clean, safe, comfortable and on time. 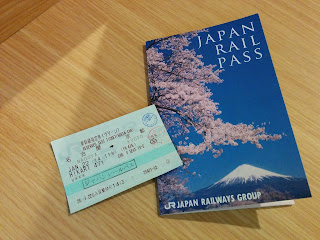 ... and the best toilets
It was almost a religious experience when I went to use the loo on the Narita Express on our first day. It had a heated seat. On a public toilet on a train! It turned out that heaps of public toilets are similarly luxurious. We've been considering renovating our bathroom and I'm wildly tempted to see if Toto products can be acquired here. 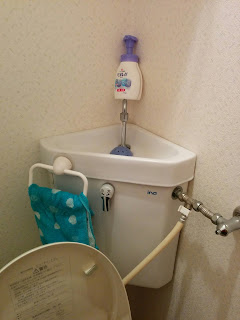 Another cool feature ... some toilets are designed so
you can wash your hands as the cistern refills

I've become a bit obsessed with Japanese pyjamas
Of the six commercial accommodation providers (four hotels, one ryokan, one train) we stayed with, five provided nightwear. Some of these were really well made, stylish and comfortable, and I actually asked at two places (our Kyoto hotel and the ryokan) whether they were available for purchase! They were not, but I wish they had been. I'm now scouring the web to try and find Japanese pyjamas (apparently known as jinbei or samue) to buy as I can imagine them becoming a much-loved wardrobe staple. 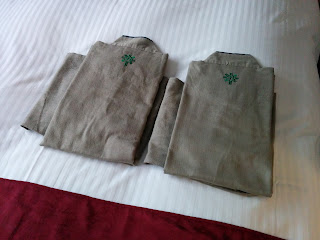 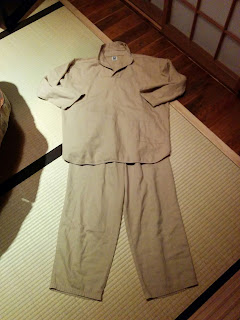 It's a clean and safe place to visit
I'm accustomed to feeling a tad anxious when I travel as there's so much that could go wrong. Will we be robbed or scammed or attacked? Will we miss our transport connections or fall down a drain or suffer from a mysterious tropical illness? Will there be a military coup or avalanche? No place is entirely safe and perhaps a frisson of danger makes travel more exciting. But Japan was an easy country to visit and enjoy. It was clean, polite and safe. Thank you, Japan!
Posted by Karin at 6:00 PM

We have one of those wash-you-hands-as-you-flush toilets at home, so we'll be ready for that at least! I want japanese pyjamas too! Did you find out how to get them?

Ha! Amazon.com seems to be the best option I've found so far. There are a couple of Japanese companies that will deliver to Canberra via Amazon's marketplace. I really liked the rustic/undyed/hemp nature of the ones in Japan though and still haven't worked out where to find them. Vaguely tempted to try to sew some.

Muji! A little bird says you frequent Kinokuniya at The Galleries, Muji is just downstairs. Can't find clothing on website but e.g. http://www.telegraph.co.uk/men/the-filter/10874400/Fathers-Day-2014-31-great-gift-ideas-for-dads.html?frame=2933450

I especially love their sheets!

Cool bananas. Thanks for the tip! I've seen that shop but never been inside. Will continue my hunt for PJs there next time we're in Sydney ;-)